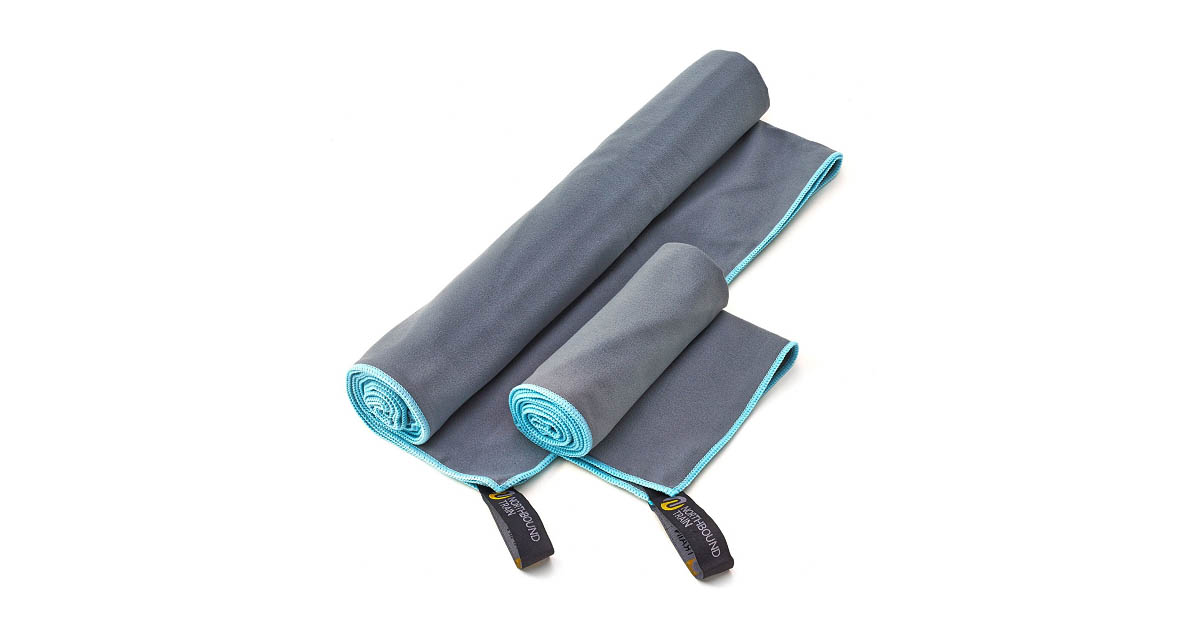 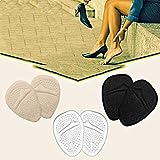 Electronic devices aren’t the only things that have become more technologically sophisticated in the past 15-20 years. The manufacturing process for towels has become much more powerful in the current era than it used to be. Microfiber is created from the fusion of polyester and polyamide, creating a fiber that’s 1/100th the diameter of a single strand of human hair. Depending on how skillfully the manufacturer can accomplish this fusion of polyester and polyamide, a microfiber towel could potentially be the most powerful cleaning tool in anyone’s hygienic product arsenal.

Let’s Have a Quick Look of Our Top 4 Picks: 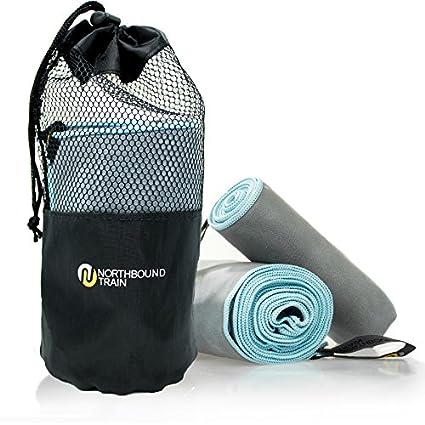 The Northbound Train fast-drying microfiber towels have been designed for the optimization of softness of absorption. These towels have been specially designed to absorb up to eight times more water than standard towels without the same level of absorption optimization. The towels are soft to the touch and capable of soaking up sweat without giving the same “sticky” feeling created by normal, cheaper towels. The towels have also been designed to be especially light and compact as well. With the light weight and compactness, owners can easily fit the towels into small spaces without much effort.

In addition to the standard microfiber towels, an XL-sized bath, beach or hair towel is also included, alongside a large face & hand towel and a mesh carrying bag. Customers can use the towels for anything from backpacking to yoga & Pilates.

One customer testified that even though they don’t normally leave reviews of products they buy online, the quality of the towels compelled them to share their satisfaction with other prospective owners. The customer stated that they’ve been a marketing instructor for over 33 years, and so when they go out of their way to leave a review, it’s either because they’re extremely satisfied or extremely dissatisfied; in this case, it was very much the former. The customer was initially a bit skeptical about whether or not the towels could actually live up to the hype, but after trying them out, they were convinced that the microfiber towels were a fair cut above the usual quality offered by standard microfiber towels.

Another customer noted that the microfiber towels were just as absorbent and ultra-portable as the manufacturer had initially claimed. The owner found that the value of the towels was great increased due to the fact that the towels were able to soak up so much moisture in spite of the fact that they weren’t quite as thick as other towels on the market. The thinness of the towels made it much more possible for the user to casually roll them up and throw them into a suitcase without any worries about space constraints. 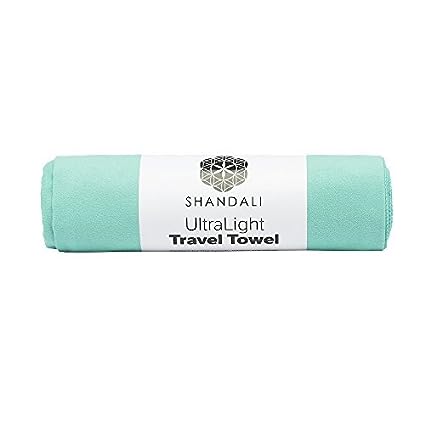 The Shandali UltraLight Travel & Sports microfiber towel features a blend of 80% polyester and 20% nylon. The thread count of the towels has intentionally been made very high in order to give the towels a pleasing ratio between both softness and overall durability.

As is to be expected from high-end microfiber products, the Shandali towels are particularly quick-drying compared to standard towels that don’t have the same level of sophistication in their manufacturing. The towels have been specially designed so that they’re ultra-absorbent, with an ability to soak up fluids even more thoroughly than standard towels which are typically much thicker on average. In order to make the towels as portable as possible, the towels have been made with an ultra-compact design.

One customer testified that the Shandali towel is highly valuable for allowing them to greatly lessen the load on their gym bag with its pleasantly lightweight design. Since the customer’s gym provided them with a towel for free, they found the Shandali microfiber towel to be a welcome alternative to carrying around a heavy cotton towel with them everywhere that they went.

The customer described themselves as a large 6-foot tall man, and they were highly pleased with the way that the towel could completely wrap around them. They were also pleased with how the towels could perfectly hang onto shower hooks by its loop, along with the accelerated drying rate compared to what they’d generally experienced with normal towels.

The customer did make a point to note that because the Shandali microfiber towel is not a heavy, looped cotton towel, it may not dry people in the same way that a typical towel does. The customer noted feeling a slight “film” of water that made him feel slightly more damp than completely dry, mostly due to the fact that the microfiber towels are just capable of absorbing so much fluid. Because the Shandali towels are designed to be so absorbent, the customer made point to put the towels through a bathing suit spinner cycle in order to dry them out a bit more thoroughly.

Another customer testified that they received their towel in a medium size in River Blue from Shandali, just so that they could try it out and give some feedback. The customer received the towel just a couple of hours before their workout. Though they were initially a bit unsure of just what to expect from the towel’s purported ability to absorb a great amount of water (due to the fact that they’re so thin), the customer’s uncertainty was very quickly put to rest within moments.

The customer stated that they sweat profusely when working out, and they found that the towel was able to dry them off with a certain thoroughness that they generally weren’t used to getting from standard towels. Like other reviewers, the customer noted that the towels stayed surprisingly light no matter how wet they got. 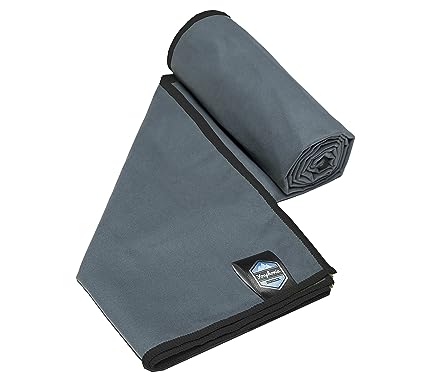 Youphoria microfiber sport towels and travel towels are designed to help the owner maximize the available free space in their carrying bags. The towels are approximately 5x smaller than typical cotton towels or terry cloths. The convenience of the towel is taken even farther with a loop that’s in place to make it easy to hang it up on hooks in showers and closets.

In addition to being much smaller than the standard sizes of other drying towels, the Youphoria towels also have a much higher rate of drying. Because the towels are made of 100% microfiber, they are capable of drying off up to 10x faster than what’s typically expected from normal towels that aren’t made of microfiber material. The microfiber constitution of the towels makes it possible for them to carry up to 4x their weight in the water that they absorb.

The microfiber blend of the towels not only makes the towels much faster-drying than the competition, but also increases their overall level of versatility. These towels can be used for traveling, backpacking, gym trips, golfing, and just about anything else that the user might do that involves sweat.

A customer who purchased the largest size of the towel testified that the towel was one of the most well-made that they’ve ever had the pleasure of using. The customer stated that they were impressed by even the aesthetic elements of the tower’s craftsmanship, noting the surged pink stitching around the edge being finished off with absolutely no fray points.

The customer described the feeling of towels being so soft that it was comparable to micro-suede. They decided to put the claim that the towel is capable of holding four times its weight in water to the test by rolling it up and leaving it in a quart of water. After putting the towel into the quart of water, they noticed that the water was completely absorbed within just half a minute. The towel took about an hour to dry out on the line, and when it did, the customer was impressed to see that it looked and felt exactly the same as it did before it had even touched the quart of water. 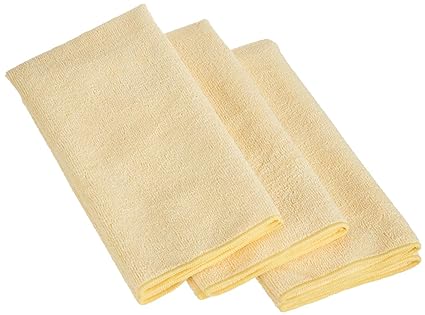 AmazonBasics thick microfiber cleaning cloth towels are designed to be ultra-soft and far less abrasive than standard towels without the same microfiber content. Even without any chemical cleaners, these towels are perfectly capable of cleaning surfaces without leaving any lint or streaks in the process.

The absorption rate of these towels makes them capable of absorbing as much as eight times their weight in water. They are designed for peak reusability, so customers can freely rinse and reuse the towels hundreds of times with the same degree of effectiveness as the first time, every time.

The dimensions of the AmazonBasics thick microfiber cleaning cloth towel are 16 x 24 inches. The towels can be purchased for the price of $5.97.

Different types of microfiber towels will have oftentimes been endowed with different levels of bacterial tolerance by their respective manufacturers. If antibacterial strength is one of your top priorities when it comes to choosing the best possible microfiber towels for your personal use, then naturally, you’re going to want to make sure that you take the antibacterial properties of each towel that you’re studying in mind before deciding to settle on any one particular brand

Heightened antibacterial properties in a microfiber towel will often provide the highly desirable effect of preventing the towel from smelling offensive after it’s been used multiple times. Towels that don’t have a great deal of antibacterial strength are oftentimes prone to smelling quite strongly after they’ve been used two or three times, but with a more antibacterial towel, you won’t have to deal with the odors nearly as much.

The heavier that a microfiber towel is, the thicker it will be. A higher weight in the towel directly results in a higher level of density as well. Microfiber weight is generally expressed in terms of grams per square meter g/m². If a towel were 400g/m², for example, then that would mean that each square meter of the towel weights approximately 400 grams.

Keep in mind, even though the weight of the towel may not dramatically affect the quality of the towel, it does tend to make certain microfiber towels better-suited for certain jobs than others. Thinner towels are generally better-suited for polishing jobs, and thicker towels tend to be a better choice if you’re more concerned with buffing things than polishing things. Certain top-quality towels might be equally adept at both polishing objects and buffing objects, but still, it can’t hurt to look into the towel’s density just to get a better idea of what jobs it might potentially do better than others.

Conclusion (Wrapping it up)

Even though the basic drying function of a microfiber towel is quite simple, there’s far more to the overall quality of a microfiber towel than meets the eye. In order to make the best choice in microfiber towels, you’ve got to make a point to take note of most of the things that a less savvy shopper would be likely to write off as unimportant. The antibacterial strength, microfiber blend, density, absorption rate, and size range are all invaluable factors when it comes to choosing the best microfiber cloth towels that you can get for your dollar.